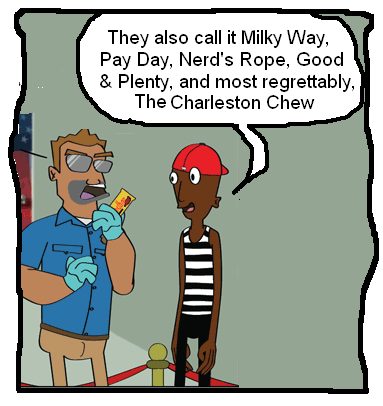 As is often the case when we get started on good penis names, we’ve got some more, in the form of a BONUS PANEL!!!

Surely, you’ve borne witness to the tactile foibles of a certain officer of the law so as to catch the in-joke, but we’re here for you even if you haven’t.

Will, always impressed with my wealth of knowledge, but also filed with contumely, redrew this comic several times hoping to place a movie poster that I could not identify. On the last of his many attempts, he chose an obscure one and occluded enough of the juicy bits to defeat me. I will award a bounty of Nipples Points to he or she who can avenge my honor by identifying any of the three posters with triple the points for the one I missed.