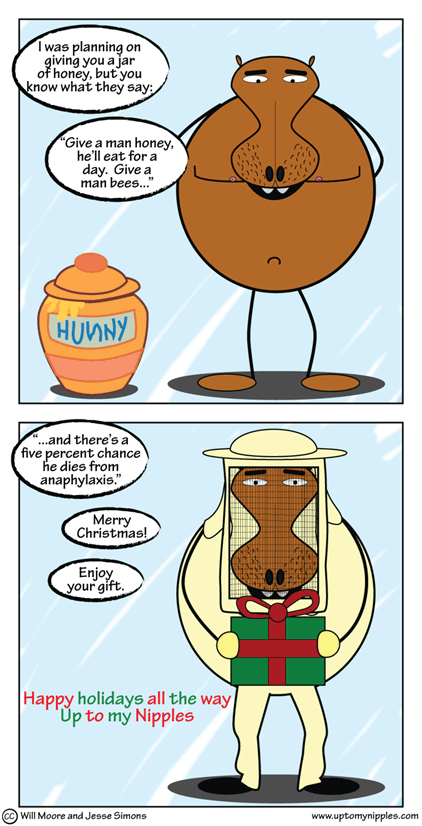 [[Stanislav standing next to Winnie the Pooh style honey Jar]] Stanislav:"I was planning on giving you a jar of honey, but you know what they say: Stan: "Give a man honey, and he'll eat for a day. Give a man bees" [[Man holding out a wrapped gift with bow, with a beekeeper mask on]] Stanislav: "and there's a five percent chance he dies from anaphylaxis." Stanislav: Merry Christmas! Stanislav: Enjoy your gift. Happy holidays all the way Up to my Nipples

If you don’t already know the saying this strip parodies, it may amount to all sorts of nonsense. Then again, bees are pretty standalone funny. Ha, bees.

I’m a Jew, so I shouldn’t be supporting this infidel holiday. Thing is, my lord and savior, the mighty dollar, has spoken down to me and He sayeth “Christmas Sells.” Sells what, you ask? We haven’t really thought that one through. How about instead of buying some of our nonexistent merchandise, you spread the Christmas spirit by spreading our comic. We’d really appreciate that. We even made it easier for you with our share button and a holiday neutral printable greeting card version of this strip. Be sure to print duplex so that it folds correctly.

We’re releasing this week’s Someday Special on Saturday so that it coincides with Christmas proper. Stop by then to find out why that makes more sense.

It’s always fun to draw your characters in costume. So much fun that, if it weren’t for Jesse, the Up to my Nipples characters would probably change garb every panel. This would substantially slow down the drawing process, the continuity would falter, and things would degenerate into a confusing mess. A lot of bad things would happen if Jesse weren’t around to smother my whims. However, I digress. The real point that I want to make is that I almost used this kind of beekeeper mask.

Speaking of being left to our own devices, if it weren’t for Will tying my hands, the entire comic to date would be one ornate run-on sentence.