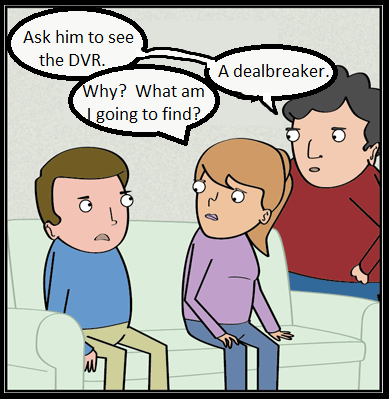 I am susceptible to the very ruse to which our blue-shirted Lothario has fallen victim. As if by habit, I choose housemates with impeccably poor taste in television programming. Shield myself as I may, the shows they watch seep into my being, until I find myself having seen the entire first season of A Shot at Love. A majority of which I watched alone and secretly under the veil of night.

When found out, there was no denying that I “watched” the show. On the other hand, I wholly denied watching Beauty and the Geek. It’s not that I hadn’t seen it. I had. Multiple episodes, in fact. It was the philosophical notion attached to the word “watch,” a certain implied fandom, to which I took exception. My eyes might have been fixated on the screen, but inside, my ego was kicking and screaming.

This strip’s been sitting in storage for a while. Back then, internet cats weren’t as frequently found starring in motion pictures. It was truly a more innocent time; a time when Grumpy Cat: The Animated Series could be understood as light comedy, not impending programming.