An Offer to Can Refuse

[[Houseman frightened and timid. Shadow of don in foreground.]] Houseman: So I said to my wife, for help, we must go to Don Corleone. Don: Why didn't you come to me first? Houseman: What do you want of me? Tell me anything, but do what I beg you to do. Don: What is that? [[Houseman whispers in don's ear.]] [[Don at his desk petting a cat.]] Godfather: That I cannot do. We've known each other for many years, but this is the first time you ever came to me for help. I can't remember the last time you invited me to your house for a cup of coffee. Houseman: What should I pay you? Godfather: What have I ever done to have you treat me so disrespectfully? [[Houseman kissing Don's hand] Godfather: If you had come to me in friendship... Houseman: Be my friend, Godfather. Godfather: Good. Some day, and that day may never come, I will call upon you to do a service for me. But until that day, except this gesture as a gift on my daughter's wedding day. [[Don, still in tuxedo, cleaning the gutter on the roof passing down leaves to houseman on the ground]] Godfather: You spend time with your family? Houseman: Sure I do. Godfather: Because a man who doesn't spend time with his family can never be a real man. 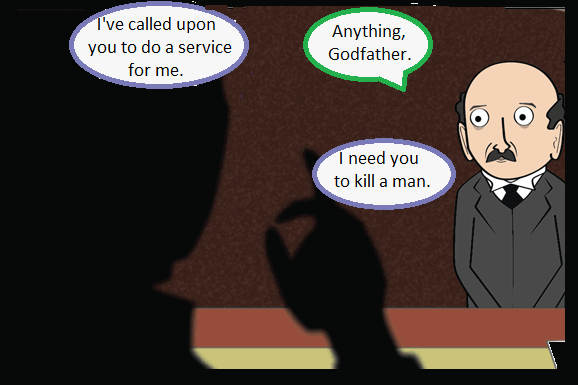 The title pun was a topic of unexpected contention. Will, who had claimed he was finished drawing the (admittedly handsome) comic, was denying me a small detail that I thought would bring the strip to a level that a stab at a film in American cinematic canon merited. Specifically, I wanted a trash can in that last panel. And he either didn’t or was too lazy to draw it. I can never tell the difference.

Anyhow, I whipped out my big guns and conjured what I thought would be the argument-ender, a Godfather pun for the ages that tied the whole strip together. And he had the audacity, the nerve, the utter foolishness to tell me that my pun didn’t really work. Well, this accretion to my already looming doubt in Will’s comedic intelligence pushed me beyond my limit. I lost my cool, and I may have called him some names. Thankfully, in the process, Will apprehended that “refuse” was not being used as a verb but as its homographic counterpart. He rightfully realized my true genius and accepted all changes.

The lovely Blaze tried to defend Will, claiming that the pun was weakened by the homograph. Will and I bonded over our summary dismissal of her argument and worth as a human being. Nothing brings people together like a scapegoat.

That’s why I miss you, Daveed.