[[Phone salesman presenting to customer.]] Salesman: And here we have the new Motorola Droid Razr. Salesman: It comes in five different colors. Customer: So, these are the black ones? [[Salesman showing the sides of two phones. Tiny strip of color.]] Salesman: No, this one's white. Salesman: And this is the purple model, our best seller. [[Holding what seems to be a semi-transparent pane of glass.]] Salesman: Or you could go with the new Windows Pane 2XP Salesman: So thin, it's all screen. Salesman: It also comes in five colors. Salesman: The guy who made this one was thinking: "orange." 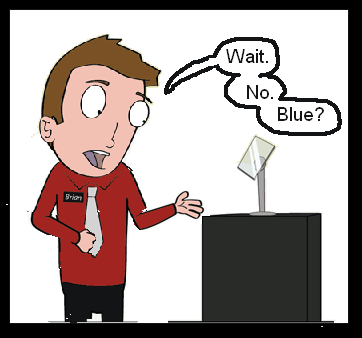 The first time I saw the commercial, I thought it might be a joke. Once I ascertained that it wasn’t, we made a joke of it.

You ought to hear the battles we have on this end over minutiae. I am a set-up perfectionist with only a vague idea as to what the fleeting emotional notion of perfection might mean. And when every attempt at perfection takes a chunk of drawing time, you could imagine why Will might resent my tendency. Or flat out refuse it. Suffice it say we had some such hoopla over here over a part of this strip, and I imagine you couldn’t in a million years (well, say 5 guesses) figure out what it was about.