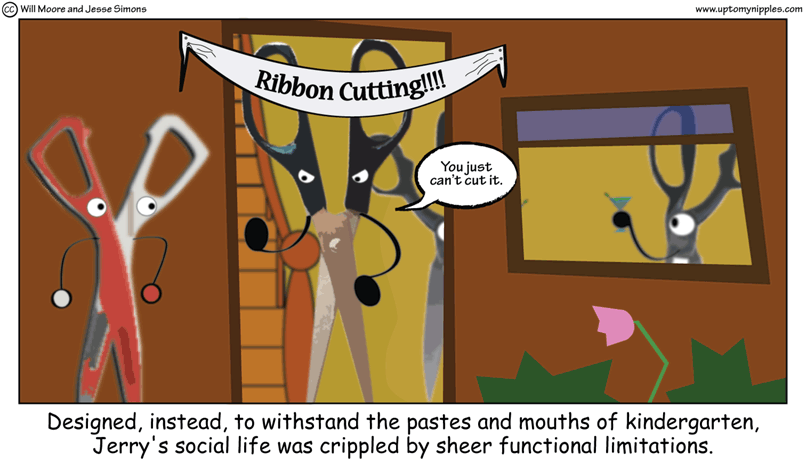 [[Sign "Ribbon Cutting!!!". Scissors standing at door, not allowing kindergarten scissors in.]] Big Scissors: You just can't cut it. Narrator: Designed, instead, to withstand the pastes and mouths of kindergarten, Jerry's social life was crippled by sheer functional limitations.

You can’t see it, but inside the house, they’re all cutting a rug.

You too must have grown up with these plastic horrors. The polygonal finger-holes are designed for alien hands. The blades are loosely strewn together as if opening and closing were an afterthought. Within a week of use, child finger strength is insufficient for articulating the tool. And worst of all, I’ve seen spoons with vastly superior shearing ability. If you set your mind to it, you might be able to cut a piece of construction paper. Made possible only by exact angular orientation. I think those scissors were the primary reason I stuck to what I was good at: eating paste.

On the growth front, we’ve made a facebook page. If we’ve entertained you at all these past couple of months, maybe we can guilt trip you into liking us. Pretty please. With cherries and sprinkles. If we haven’t earned your like yet, there’s a button up there near the RSS one for when you change your mind.

I originally had the banner reading “Ribbon Cutting Party!”, but Jesse, perpetual stick-in-the-mud that he is, disagreed with my choice. We settled the dispute the only way men know how: Rock, Paper, Scissors. Being that I’m in California, and he’s in New Jersey, we had to Rosham over Skype. This might seem perfectly reasonable, until you learn that I don’t have a webcam; we did it through instant text messaging. The rules were simple: at the word “go,” we both closed our eyes, counted to three, typed our choice, and opened our eyes to see the results. Jesse won, and we had to do things his way. Despite the fact that he typed his answer before I did, I’m still convinced that he cheated.

Where did the phrase stick-in-the-mud even come from? I think it usually refers to someone who’s ruining something, or generally un-fun. This doesn’t make sense, as a stick in the mud sounds like a blast to me. So I take it back, Jesse isn’t a stick-in-the-mood, he’s a knob-kneed son of a barbastelle.

I’m glad I don’t edit Will’s posts. If I did, we may never get great accidental penis names like stick-in-the-mood.