[[Double bed window view again. Lots of cat noises like last time. Humphry in bed. Stan looking out window.]] From window: Meow! From window: Myow! From window: Meeow! Humphry: It doesn't even sound like cats anymore. Humphry: It sounds like someone [[italics]]pretending to be cats. [[Stan at window. Fighting cats. On left hobo man with flaming barrel]] Hobo: Meow! Hobo: Meow! Hobo: Meow! Stan: Hobo Joe! Stan: What are you doing here!? Hobo: Reckon I'd see what all the fuss was about. Hobo: And you know me, all that hootin' and hollerin' got me worked up. Had to join in. [[Hobo pointing down at his bare foot. Wearing the boot from the cats on the other foot.]] Hobo: Also, hoping I could get that silly clown to throw his other boot. 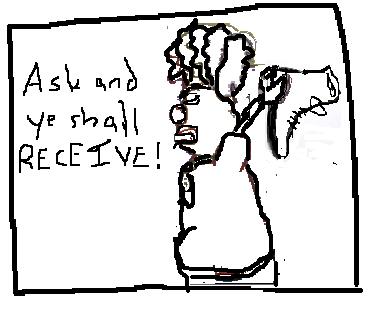 Bonus panel: Will’s been too busy studying for graduate placement tests and sending his girlfriend off to lesbian land to draw extra panels. So I slapped together a touch-pad MSPaint depiction of Humphry’s reaction. It’s sort of his M.O. Ours? Hobos with boots.

Originally when designing the site, we wanted to create a “POWER UP YOUR COMIC!” button that would play a related sound or movie to accompany the strip. It’s times like these when a hobo’s doing his darnedest to make cat noise that I regret not going through with the idea.

Ha! Didn’t notice until now, but Will gave that hobo jowls for earlobes. I approve.
-Jesse

I officially approve of the bonus panel.
-Will