Give ‘Em the Boot 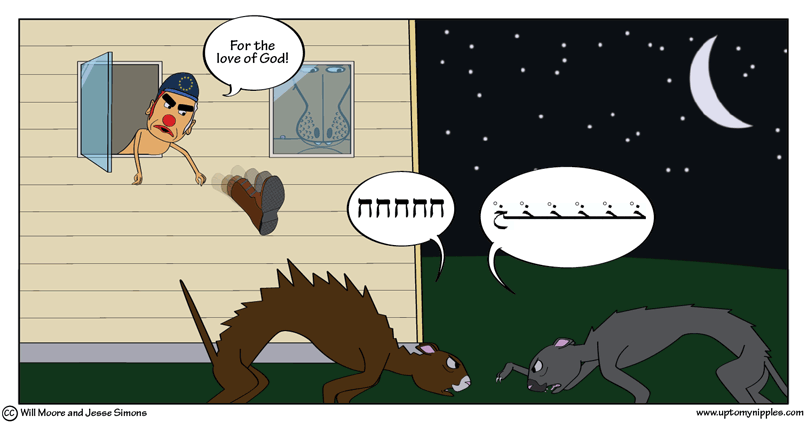 [[Humphry leaning out window hat VERY visible, throwing a boot. Two cats on the ground fighting. One with arched back and raised hair. The other teeth bared and swatting.]] Humphry: For the love of god! Cat 1: [[Hebrew hissing]] Cat 2: [[Arabic hissing]]

This must be the our highest brow punchline yet. So high that it’s even above my bushy brows. I’m pretty sure I wouldn’t understand it had I not written it. Does that mean I think it’s the best joke we’ve done? Probably. Does it mean that I expect anyone else to enjoy it? Absolutely not.

For the good percentage of you who don’t know Hebrew or Arabic, both languages have a voiceless uvular fricative, which when held out is just a glorified cat hiss. Tada, the only political cartoon we may ever write. New Yorker, here we come!

I forgot to thank the Farva and the Blaze for their individual foreign language skillz. Though, each would probably vote the other’s cat be thrown into a lake.
-Jesse