[[Two guys walking down sidewalk.]] [[Girl barely entering the panel on other side.]] Scruff: Uh oh. Look who it is. Girl: NATHAN. COOPER. [[Girl slapping one guy.]] Girl: How could you not call back? Girl: After the night we had!? [[Hand print on face.]] Guy: I'm so sorry. It's just I had a terrible accident. I'm sure I could never forget you, but at first I couldn't even remember my own name. [[Woman hugging man.]] [[The other guy holding in his smile.]] Girl: Oh you poor thing. Here's my number again. Call me. [[Other guy celebrating. Palms to temples, elbows out, huge smile.]] Scruff: Oh my god! I [[bold]] cannot [[bold]] believe that just worked. You're a genius. [[Blank stare.]] Guy: Who are you? 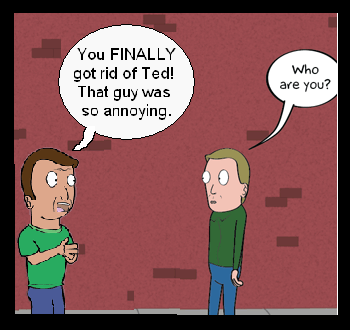 This is surprisingly like a How I Met Your Mother joke for the first five panels, so much so that I fear that it actually is one (I’ve thankfully not seen all of the show to check). Also, so much so that I told Will to model the characters after Barney and Ted, but as you see, no one is suited up; clearly that’s not supposed to be Barney then. The other guy, though, would suffice as a stunt double for college-era Ted.