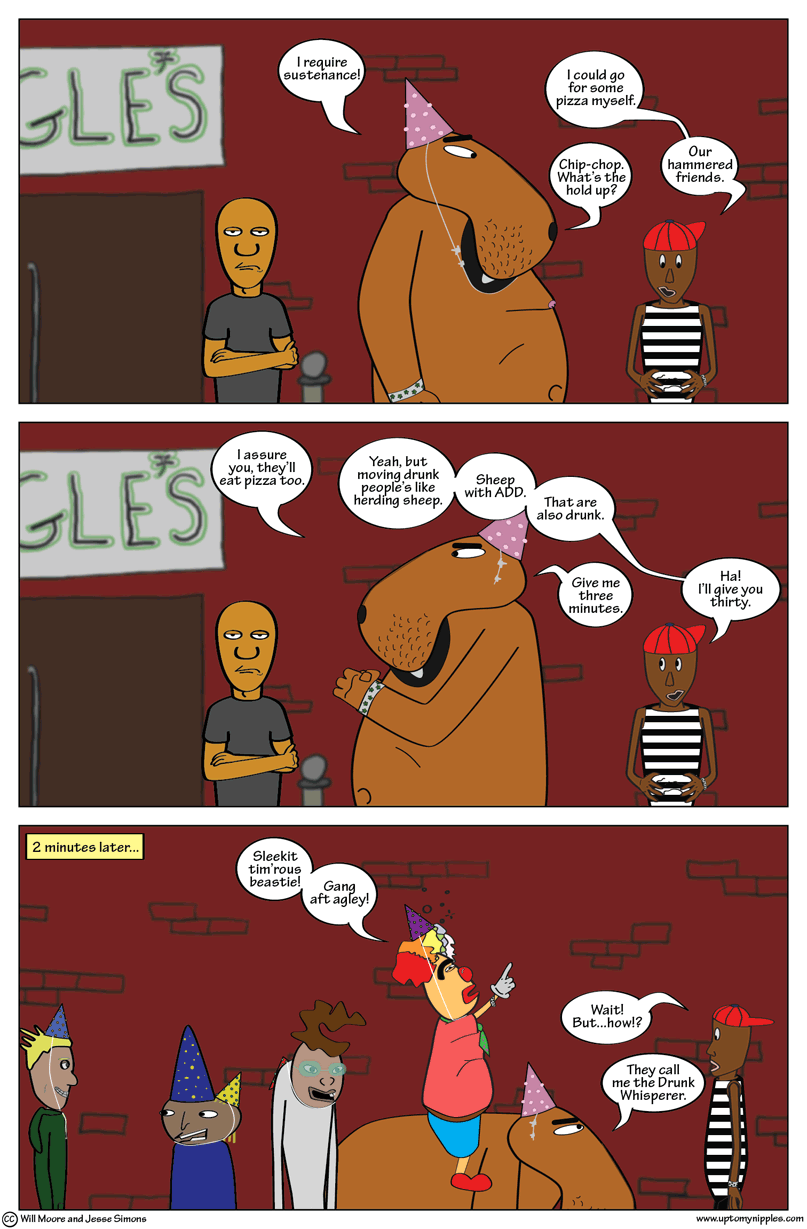 [[Mo and Stan outside the bar. Make a line, and a window. So that the talking outside in the third comic will work when we go back to it.]] [[Stan maybe somewhat drunk]] Stan: Gather the troops. I require sustenance. Mo: I could go for some pizza myself. Stan: Chip-chop. What's the hold up? Mo: Our hammered friends. [[Still outside bar]] Stan: I assure you, they'll eat pizza too. Mo: Yeah, but moving drunk people's like herding sheep. Mo: Sheep with ADD. Mo: That are also drunk. Stan: [[cracks knuckles]] Give me three minutes. Mo: Ha! I'll give you thirty. [[The rest of the crew stumbling behind Stan. Humphry riding Stan.]] Narrator: 2 minutes later. Humphry: [[yelling and pointing in the air]] Sleekit tim'rous beastie! Humphry: *Hic* Humphry: Gang aft agley! Mo: Wait! But...how!? Stan: They call me the Drunk Whisperer.

Since horse whispering is called Natural Horsemanship, this must be Natural Drunkmanship, which does have a certain ring to it, no? “Horsemanship,” that’s really just three nouns pasted together into a single word. I can’t help but imagine it as some sort of poorly named mythical creature, a centaur with a mast sticking out its forehead. Or something to that effect. Will, get on drawing that.

Yes, Humphry is plastered, and yes, he’s prattling on with drunken nonsense. But that drunken nonsense also happens to be a famous Scottish poem written in “English.” Turns out, Scottish English and Drunken English are one in the same.

I owe some shout outs for this one. First, to Kelly who to my knowledge coined the term. Next, for the lovely Annie, who was the very Whisperer in question. Lastly, to my many sloppy friends who continue to force me to practice herding ovine drunkards.