[[news box "Cheryl Boone Isaacs, President, Acadamy of Motion Picture Arts & Sciences"] Cheryl: In light of recent criticisms that the Academy does not properly represent minorities, we've decided to expand our award ceremony. Cheryl: Among the new categories: [Category names the main focus.]] Box: Best Black Actor. Box: Best Minority Actor, Non-Black Box: Best Black Comedy/Musical, Non-Tyler Perry Box: Best Depiction of the Ghetto Struggle Box: Best Sound Editing by an Immigrant Cheryl: Just as presenting actresses their own awards solves the problem of marginalizing women, we hope the addition of these new categories will help make the next Oscar's the most inclusive yet. Cheryl: Except for American Indians. Cheryl: May they forever be inaccurately represented in American Cinema. 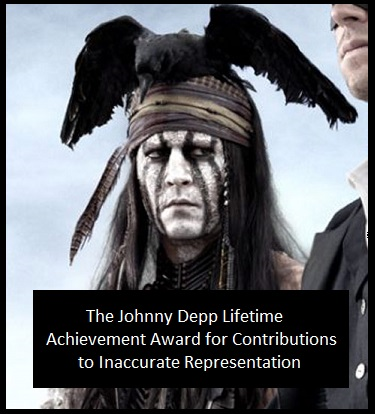 What’s that!? A new comic after nearly a year and a half away!? Apparently, the Oscar controversy was so compelling that it inspired Willy to shake out of hibernation.

That’s only a partial truth. I may have again convinced Will of the nuanced benefits of collaborating with me, but his dedication to stupid English learnin’ is preventing him from drawing how he used to. If we can write more comics like this, in which he can exercise his lazy muscles and blatantly recycle panels, I just might be able to goad him into birthing a couple more.

There are so many blog tangents I would take if my writing chops were warmed up. Marlon Brando standing up for Native Americans. The ambiguity of the term “black comedy.” Us conflating the Oscars and the Golden Globes by nonsensically clustering comedies and musicals. Etc etc.

Instead, I cross my fingers and hope Will will grant me more opportunities to speak from this prominence. And that you will recall your former affections and grant us your eyes and your clicks.

I missed you, truly,
Jesse