[[Plane landing on runaway. Claps aplenty.]] Humphry: [[coming from window]]What's with the clapping? [[Humphry through outside window.]] Humphry: Is it for the pilot? For not sucking at his job? Humphry: Or are you just glad you made it out alive? [[Goofy guy next to Humphry looking down at Humphry's hands.]] [[Humphry looking down surprised and horrified.]] Guy: I'm clapping cause you're clapping. 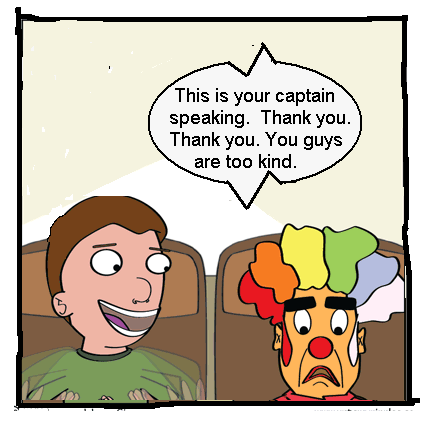 It’s worse still when this happens at the movie, usually opening night. The audience erupts at the credits, and I feel the need to inform everyone around me that no one with any part in the making of the movie is present, and further, that their theater-mates (read: me) are disinterested in their opinion. As such, I planned to release a similar joke earlier amidst the cinema series, but Will wanted none of it. I think he believes projectionists deserve the applause.

Despite its cheesiness, I might clap for this flight.