[[Angled birdseye of set of chess tables one dapper fellow standing in middle with hand on chin.]] [[Close up single board guy standing]] Master: Whelp, that's checkmate. [[Four close ups of the Master in a row.]] Master: Checkmate. Master: That's mate. Master: Checkmate, again. Master: Game over. [[Master talking to a friend.]] Master: I really thought I'd win one of those. Friend: Yeah, you're pretty terrible at chess. [[Father with baby bjorn.]] Friend: Literally, worse than that baby. Master: If I weren't playing four other games, I know I could have beat him. 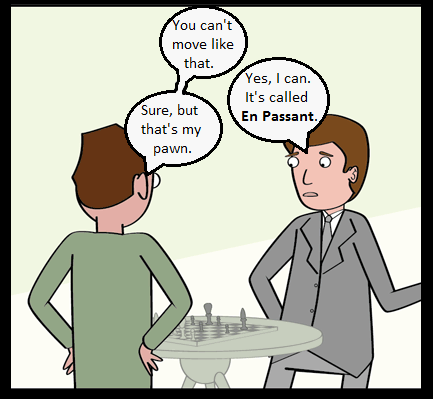 Such feats of chess excellence are meant to represent individual greatness. Be it the work of a prodigy or a charlatan, the spectacle intends to impress. Really, today’s protagonist is of the same feather. Only, his triumph is one of ineptitude.

In my middle school, where at one point, social status among beta males was decided on the connect-four/chess court, you weren’t worth your Gushers if you didn’t at least pretend to know what En Passant was. We may sometimes have mixed up which queen went where, but we’d be damned if we didn’t know the particulars of the chess special moves. And since castling was so commonplace, En Passant became the real ace up your sleeve. Or since it’s practically useless, the 3 of clubs up your sleeve.