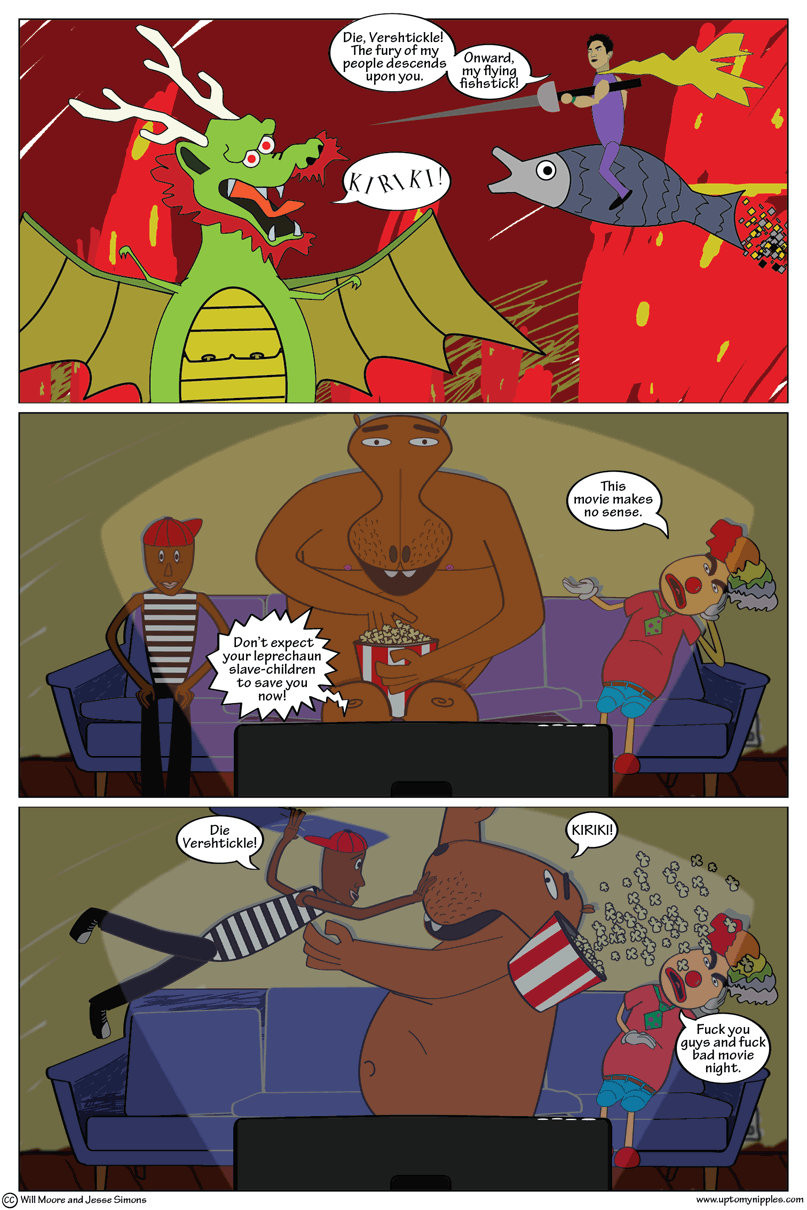 I’ve mentioned before and it bears repeating: I’m not Humphry. And I plan on telling myself that until the evidence of overlapping traits is incontrovertible. One such undeniable trait is our distaste for bad movies, and our greater distaste for the phenomenon in which that very badness of bad movies is relished. The odious nature of these events is compounded by peoples’ need to create a running commentary on why the movie is, in fact, so bad. Attention nerds: none of us is as funny as Mystery Science Theater 3000. Shut up.

Use that rant as explanation as to why it was necessary for Humphry to drop the f-bomb. We’ve never claimed to be above foul language. Hell, we’ve essentially written three separate punchlines that relied on the same cuss. But a good fuck has to be deserved. Needless to say, I considered both these fucks well-warranted.

This strips marks the first (and hopefully not last) appearance of our roommate, Dingdong David. Ladies, I assure you that my rendering is spot-on, right down to the fashion sensibilities. His face is that smoldering, his arms are that beefy, and he does frequently don a purple tank top, purple pants, a yellow cape, and green wristbands. Most importantly, he has comparable acting abilities to his father and namesake, Dingdong Dantes.

I think I should also mention this comic, which Jesse forgot to note when bringing up our past vulgarities. Shame on you, Jesse, for such a flagrant oversight. Apparently, you have but minimal knowledge of our own corpus.

Apparently, you have but minimal knowledge of our language. My post never claimed to be our Compleat Anthology of Cursing, just a set of posts that used the same word as a punchline. Stop wasting my time and go back to watching more god-awful Blaxpoitation.

I was giving you the benefit of the doubt, assuming that you simply forgot our other f-word comic. If you do claim to have remembered it, and intentionally excluded it, then you have committed a far greater error. That is, you offer examples for a claim, and intentionally exclude the best one. My mistake wasn’t in misinterpreting your language, but in underestimating the apparent depths of your stupidity.