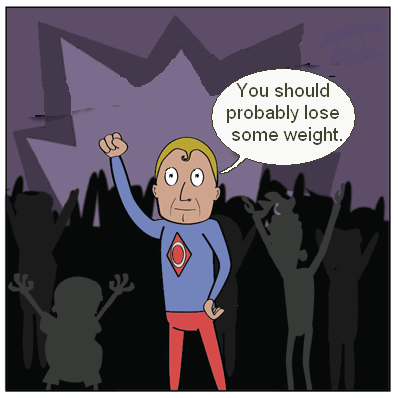 I recently dressed as Captain Obvious for a costume party. One of those ridiculous letter themed parties, in this case, ‘C’. I briefly considered dressing as Cool Hand Luke and eating hard boiled eggs the whole time, but I decided against it for the sake of my stomach. Anyhow, Captain Obvious is a rock solid alibi for getting away with saying really mean things. And this is coming from someone who doesn’t normally need an excuse.

We have another captain obvious joke coming soon (or already out, I’m writing this a week in advance) in the form of a guest comic. That one takes a less standard notion of the term. Really, instead of touting my own efforts, I should instead applaud this pre-existing work.