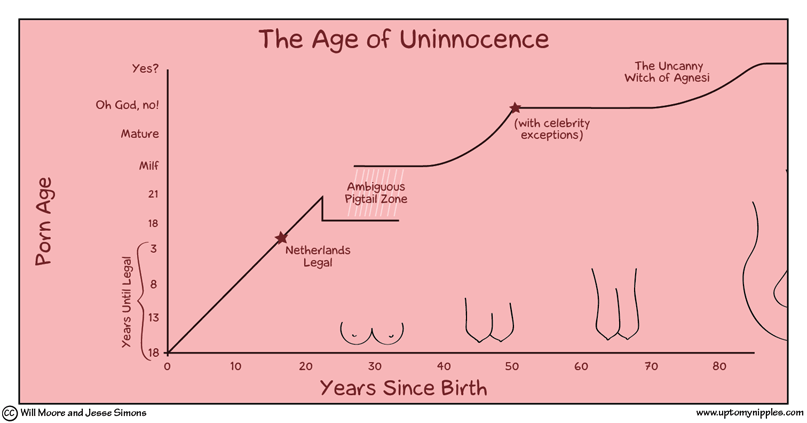 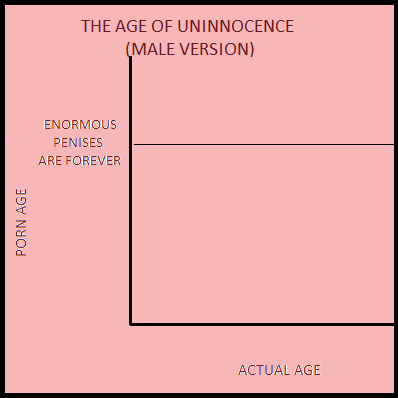 **NOTE**
Upon reexamination of this comic, we’ve decided it imperative to apologize for some of the jokes that we find unnecessarily sexist. We should stress that this isn’t in reaction to some complaint, but rather results from personal reflection and ensuing embarrassment.

Despite the inherent sexism that might exist in parts of the porn industry, if this strip had just focused on how it labeled women of different age groups, we believe we would be free of blame. However, by adding the “Oh God, no!” and “Yes?” headings, we’ve included naive personal objectification of aging women. And worse still, in an inaccurate and unfunny way. What we should have done is used “N/A” to replace the former heading, since the industry almost ignores that age group entirely. Instead of “Yes?,” we could have created some grouping that demonstrated the curio pornography whither geriatric actresses are relegated.

Alternative names:
Women in Cinema
The Age of Ininnocence

Originally, we used an inverse x-cubed function for the curve from “Oh God, no!” to “Yes?” but I stressed that half a Witch of Agnesi was more fitting. Unfortunately, once Will learned that there was a curve called the Witch of Agnesi, he required that we muddle the comic with its name. Combine it with a term used in robotics and graphics, and ouila, we produce a joke that literally no one will understand.

And that’s why we don’t have more fans.