[[CEO at board meeting. Bar chart with profits for bed bath and beyond. Two bars for each very adjacent. Separation between the types. Using a long pointing stick at beyond.]] CEO: As Q2 to Q3 profits clearly demonstrate, interest in all thing bed and bath is better than ever. CEO: Beyond, however, is woefully underperforming. [[CEO closer up grimmer face]] CEO: To assure customers waste no time perusing items unsuitable for the bed or bathroom setting, and in a move even I don't understand, we're the splitting the company in two... CEO: Gentleman, I present to you [[Two stores. Giant bed bath and beyond on left. Shack like looking thing with Byondster.]] 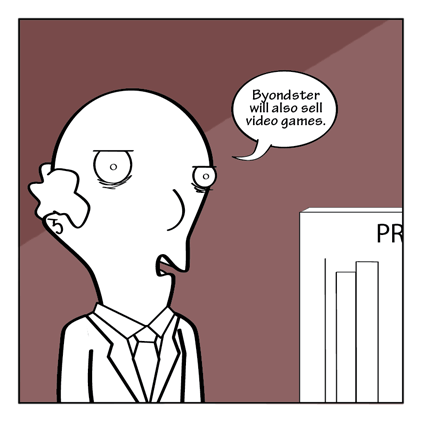 In case you’re cave-dwelling and don’t know about the Netflixplosion, you might need this to understand Willy’s BONUS PANEL!!!

Our normal buffered queue of upcoming comics moved aside as we had to rush to write and draw this before it was ancient news. Even still, webcomics like The Oatmeal already had time to put out a damn graphic novel to say much of the same thing. Apparently the secret to hundreds of thousands of fans is dragging out the joke as long as possible. WHO KNEW!?

If Bed, Bath, and Beyond weren’t such an easy target, we would have gone with Dunkin Donuts for a more suitable comparison. Those guys should have split their FAKE business: donuts, from their REAL business: coffee and cheap egg sandwiches, years ago. Though having a donut-less Dunkin’ Donuts may be a one-way ticket to false advertising hell.