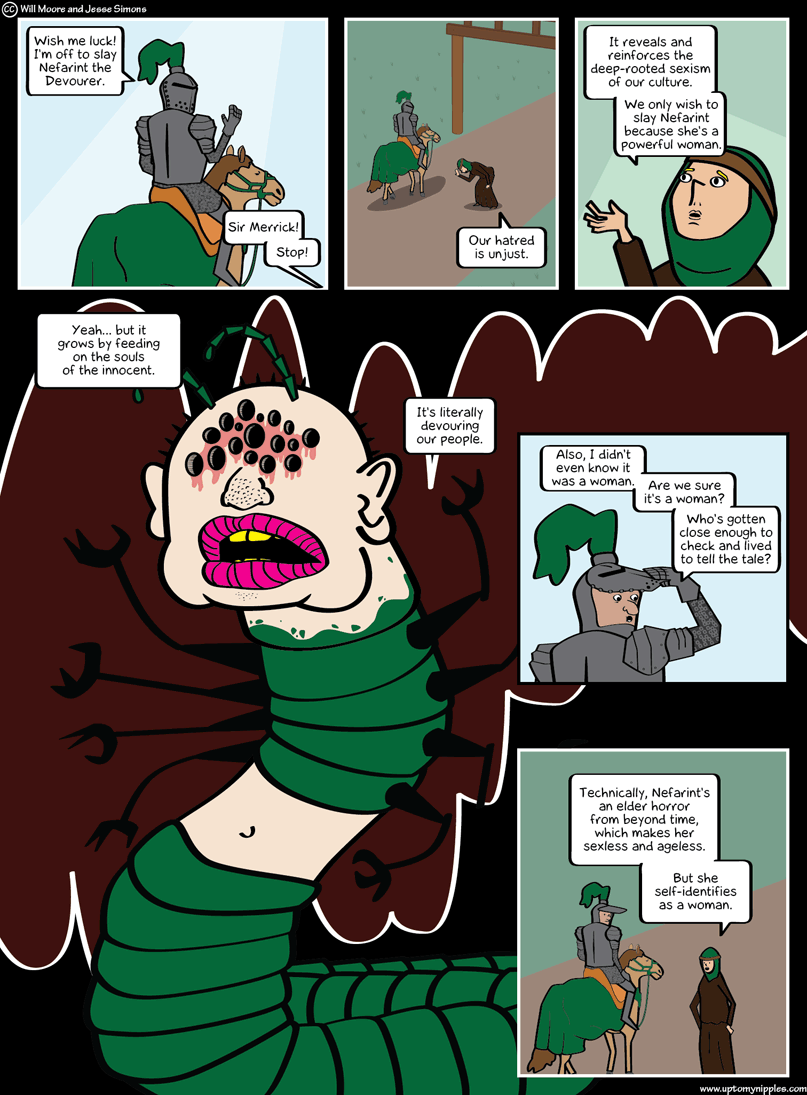 [[medieval knight, riding on a horse]] Knight: Wish me luck! I'm off to slay Nefarint the Devourer. Woman:[[off panel]] Sir Merrick! Woman: Stop! Woman: Our hatred is unjust. Woman: It reveals and reinforces the deep-rooted sexism of our culture. Woman: We only wish to slay Nefarint because she's a powerful woman. [[panel showing the horrible monster]] Knight: Yeah...but it grows by feeding on the souls of the innocent. Knight: It's literally devouring our people. Knight: Also, I didn't even know it was a woman. Knight: Are we sure it's a woman? Knight: Who's gotten close enough to check and lived to tell the tale? Woman: Technically, Nefarint's an elder horror from beyond time which makes her sexless and ageless. Woman: But she self-identifies as a woman. 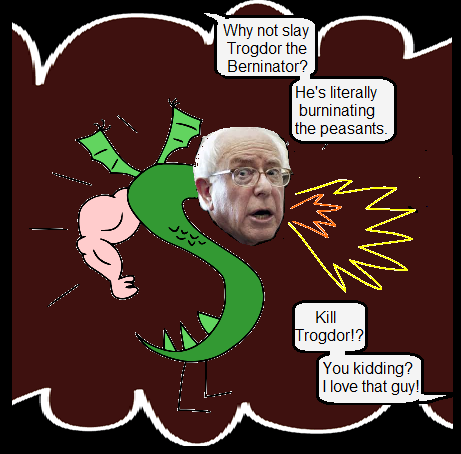 If you’re going to read this as the political allegory we may or may not intend it to be, the bonus panel is likely to expose our hand.

For fear that obliquely politicking may upset people, I must begrudgingly say a few words on Hillary and Co. My political leanings are crazy, and not to be discussed here at any length. Know that I have no horse nor donkey nor elephant in this race. As always, candidates on both sides of the fence, straddling the fence, digging under the fence, et cetera, all have shortcomings and tallcomings.

I believe subconsciously and consciously, Hillary is undeniably being treated worse because she’s a woman. She also comes off smarmy and condescending in the same ways, that say, Al Gore, was smarmy and condescending. I genuinely hope I don’t feel that because she’s a woman, but I can’t always tell. It’s difficult to check things that I can’t see, and that includes my privilege.

This is all to say that we don’t mean to offend any Hillary supporters, and we think it’s as reasonable to vote for her as anyone else. On the other hand, transgendered people might have an actual bone to pick with us.

I see the articles. I’ve read many of them. It’s difficult not to feel conflicted because I can’t totally dismiss the fact that maybe they’re right. What we have here is a “boy who cried woman” situation. Classically, historically, women receive a hefty degree of unfair scrutiny and criticism. Along comes a politician totally deserving of my dislike for entirely nonwomanly reasons, but the condemnation of the white man is no longer to be trusted. Thanks, Obama.

But it’s fun to grapple with contradiction and nuance, so for that experience, I thank the “you-only-dislike-Hillary-because-she’s-a-woman” thinkpieces. On the other hand, they annoy me because I don’t see them grapple with nuance. Look, I don’t like Al Gore or John Kerry either. I fault Hillary for Libya and also to a greater extent Obama. I do like Elizabeth Warren. I like her more than Bernie. I love it when the titanic trio lay the smackdown.

I will say this: We could do far worse than Hillary. Specifically, Ted Cruz. Please don’t pick him. People ballyhoo the most about Trump, but Cruz is most likely to bring about The Final Conflict.