[[Shaggy and Scooby looking terrified.]] [[OooOOOooooOOooooh!]] Shaggy: Jeepers, Scoob! Shaggy: I hope it's not a g-g-g-g-ghost. [[Scooby flippinglight switch with his tail.]] [[Four legged-ghost.]] Ghost: AAAAaaAArrRGH! Shaggy: ZOINKS! [[Ghost chasing Shaggy and Scoob one way through a four doored hallway.]] [[Shaggy and scoob chasing the ghost the other way, sheet getting caught on something.]] [[Daphne, Velma, Fred running by in the background.]] [[Mom holding the sheet somehow in front of her so that it also blocks genitals of both.]] Shaggy: Mom? Shaggy: Dad? Shaggy: In the living room!? Mom: And we would have gotten away with it too if it weren't for you meddling kids. 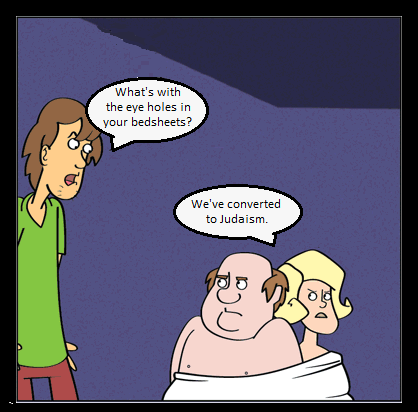 If you don’t follow our scene closely, you may not have known those kings and paupers at Penny Arcade recently wrapped up the first season of a webcomicking reality series. The elimination challenges pit two artists for 90 minutes to create a cartoon based on selected cue words. This strip was born of an attempt to play along on the words “mystery” and “naughty.” That is to say, this was not the only reasonable strip to make. Naughty mystery is practically a synonym for soap opera. Sadly, our attempt at the challenge didn’t go entirely according to plan. Will quickly realized that restricting himself to a mere three half hours rips the fun out of his artistry. So we might have gone over the buzzer by a wee little bit. Or a wee big bit. Another glorious penis name, for those keeping track.

Re the bonus panel, the Rogerses have eye holes in their bedsheets because they’re beginning their transition to Judaism but haven’t yet had a proper conversation with their Rabbi.