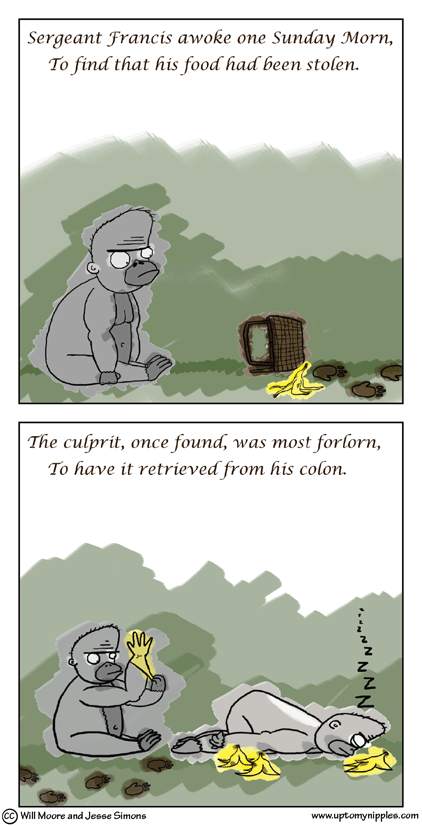 [[Sad gorilla sitting and looking at flipped picnic basket and banana peel]] Sergeant Francis awoke one Sunday morn To find that his food had been stolen. [[First gorilla putting on latex glove near sleeping second gorilla]] The culprit, once found, was most forlorn To have it retrieved from his colon.

When reading that title recall that fare is a synonym for food. Now, please excuse me as I must dedicate my full attention to patting myself on the back.

Will is often immediately attached to these animal names he comes up with. I tried to convince him that Sergeant Francis wasn’t ideal for the rhyme scheme, but the heart wants what it wants, and though his words spoke of a willingness to compromise, it was clear that his soul wanted none of it. That is why our gorilla is also a non-commissioned officer of the U.S. military.

Don’t get us wrong, we really do appreciate that you’re here now, but we’d like it even more if you came back next time too. If you like us on facebook with one easy click of our new button, you’ll be kept in the loop on all of our releases. If we’re not good enough for your liking, give it to the defunct Perry Bible Fellowship, up there with the best comics of all time, for inspiring today’s strip.

It’s only natural that Jesse should get all excited about the title, as that was his only contribution to this comic. This is the first Up to my Nipples presented originally as I had written it, with no text edits of any kind from Jesse. It should have been otherwise, I was more than willing to change “Sergeant” to “Sir,” and told Jesse as such. However, he had already written his blog post, the major portion of which discussed my unwillingness to make the edit, and refused.

Take a look at this image. Now go back and look at it some more. What do you suppose that animal to be? Sasquach? Wrong. I was looking for a reference image for Sergeant Francis and came across this… whatever it is. Certainly not a feasible representation of any gorilla I know. Shutterstock, who wants you to pay for that image by the way, calls it “happy cartoon gorilla sitting and smiling.” Sitting? Yes. Smiling? Sure. Gorilla? Debatable. Happy? I tend to doubt it.

Will is fostering a culture of lies. That or he has the memory of a goldfish. Don’t let his boyish charm convince you of his stream of untruths. Also, this is the first presented as he’s written it because it’s essentially the first he’s had any part in writing. And that boyish charm I mentioned, not even that charming.

You’re just using verbal pyrotechnics to subvert the real issue at hand: I’m prettier than you.