[[back of Humphry, Stan, Mo's and another guy's heads in the movie theater.]] Stan: This is the last time you choose the movie. Stan: If this even is a movie. Mo: I think it's a photograph. Stan: You promised extraordinary! Humphry: No no. I said [[bold]]extra ordinary[[bold]] as in [[bold]]very[[bold]] ordinary. Humphry: More ordinary than an imagination could conceive. Stan: Literally nothing has happened the past half hour. Humphry: Nor will it the next seven. Humphry: Pretension requires sacrifice. [[Guy standing up]] Humphry: Those elite few who- Guy: Hey! Keep it down. Guy: I'm trying to focus here. 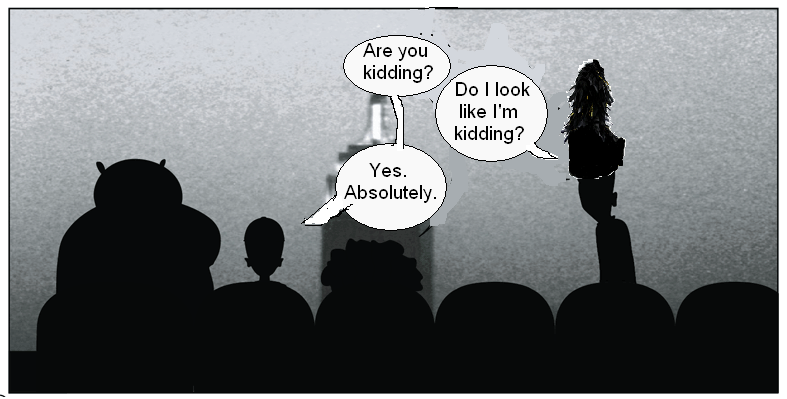 Any other comic, I’d have hounded Will to add movement between panels. But here, the very point is monotony. I did try to convince him to give the elitist hipster a hat to match his attitude. I still can’t believe he refused me. Well, I don’t need him for my BONUS PANEL!!!

I’m a Film major. Consequently, there are certain classes I’m required to take and certain films I’m required to “watch.” Empire isn’t one of them, but I assure you, I’ve suffered through things almost as painful (I had to watch this twice, mind you). My personal approach to such movies is to start zoning out as soon as possible. This can be done by considering pants, or cheese, or pants full of cheese.