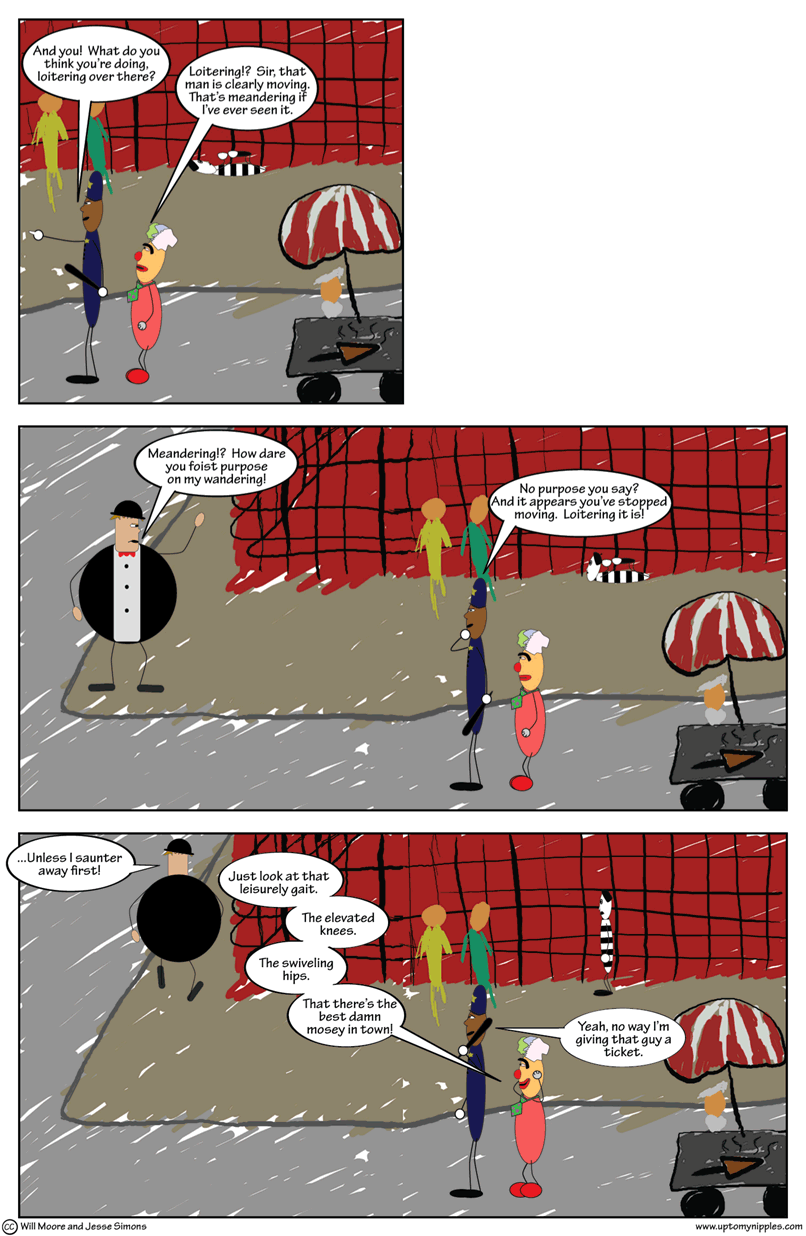 Cop: And you, what do you think you're doing, loitering over there? Humphry: Loitering!? Sir, that man is clearly moving. That's meandering if I've ever seen it. [[dapper man walking down to street corner]] Fop: Meandering!? How dare you foist a purpose on my wandering. Cop: No purpose you say? And it appears to me you've stopped moving! Loitering it is! [[man walking away]] Fop: ...Unless I saunter away first! Humphry: Just look at that leisurely gait. Humphry: The elevated knees. Humphry: The swiveling hips. Humphry: That there's the best damn mosey in town. Cop: Yeah, no way I'm giving him a ticket.

I wish I could pull off dapper. In my youth, I dabbled in pocketwatchery in an attempt to one day earn such adjectival praise. Recently, I have few such fineries, but I secretly maintain the jaunty swank I developed back then as an ace up my sleeve.

To everyone who let us know what they (dis)liked about the site and comic, thanks. Enjoy your well-earned “bonus” strip. I use quotations because we probably should already be releasing more than a comic a week. Once we build up some momentum or confidence that schedule will become the norm. Until then, the fear that our seemingly deep well of ideas is shallower than we imagine reigns supreme.

A few questions from the mailbag about the art in the previous comic. Justine from California asks “Why is there a bearded orange on your poopsicle stand?” and follows that with “What’s with that cockroach juggling a fish?”

Well Justine, the style of the backgrounds is highly abstract. Most of the objects therein are vague blots, and thus act as a Rorschach test. So the real question is: Why did you see a bearded orange on a poopsicle stand? Only you, I think, can answer that question, and only then after some profound soul-searching. The so called “cockroach juggling a fish,” however, is just that. Frankly, I don’t see how anyone could recognize it as anything else.

If for some odd reason you’re stopping by to check out this strip for a second time, you might have noticed small changes. We’re still tweaking our bubble size and shape, font layout, and other such minutiae. Let us know if you have preferences one way or the other. We’re not sure what we like best, so the more opinions the better.